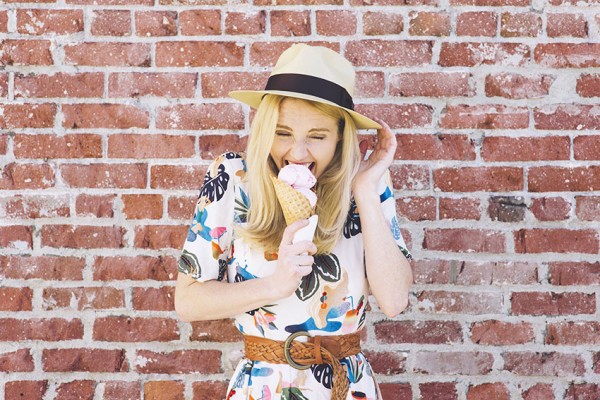 July is National Ice Cream Month! What do ice cream and TMJ have in common? They’re both ways that your mouth can cause headaches. And now it seems that ice cream headaches may be more similar to migraines than we ever thought before. Before you indulge in your favorite summer treat, learn if ice cream helps headaches.

Ice Cream Headaches May Be Vascular

The scientific name of ice cream headaches is sphenopalatine ganglioneuralgia, but they’re also known as “brain freeze.” So what is a brain freeze explanation? In the past, most believed brain freezes were just another example of referred pain. Referred pain is when you feel pain in a part of your body but the pain actually comes from a different part. It occurs because the two body parts report pain on the same nerve. In this case, you feel the pain in the roof of your mouth as a headache because both report along the trigeminal nerve.

A brain freeze explanation says the sudden increase in blood flow to the brain is the cause. A study traced the blood flow in the brains of 13 volunteers as they drank ice water through a straw. The straw forced the cold water against their palate, which is the trigger point for ice cream headaches. Researchers found that the painful headache was actually caused by an increase in blood flow in the brain’s anterior cerebral artery. Because the skull is a closed system, the increases in blood flow put pressure on brain tissues. As a result, pain occurs.

The lead researcher attributed the response to a defense mechanism that intends to protect the brain from damaging temperature shifts. When the cold liquid hits the palate, the body floods the brain with blood to help keep it warm. The headache is just a side effect.

Although this research is a promising lead, it was only reported at a scholarly conference, and not published in a journal. That means scientists haven’t reviewed it for accuracy or significance.

Although the 1992 study concludes, “the ice cream headache seems not to have any special significance for migraine patients,” anecdotal evidence points in a different direction. So does ice cream help migraines? Many migraine sufferers report that inducing an ice cream headache can stop a migraine in its early phases.

Why this would be so is unclear, since a double influx of blood would seem to increase the pain of a headache, not relieve it, but perhaps inducing an ice cream headache somehow regulates the blood flow associated with migraines.

Remember, though, this evidence is anecdotal and has no scientific basis or verification. At the very least, you can enjoy a delicious treat next time you have a headache. It doesn’t hurt to experiment!

If you are looking for a proven drug-free migraine treatment, TMJ treatment may be the answer for you. Not all migraine sufferers have TMJ, but if TMJ is acting as a trigger for your migraines, studies have shown that treatment can reduce the frequency and severity of your headaches. That way, you don’t have to worry about experiencing both brain freezes and migraines all summer, only brain freezes!

To learn whether TMJ treatment can help your migraines, please contact Beyond Exceptional Dentistry in the Hilton Head, SC area today.