Loss of a Reimplanted Tooth

If you have had a tooth knocked out, it’s often possible to get it reimplanted. If you work quickly and get the tooth back in place quickly, it’s likely that the tooth will reaffix itself in place. For the most part, it should give you an attractive appearance, and will even work very well for a while–and sometimes quite a while–but over time it may be weakened and may have to be replaced. At that point, a dental implant is probably your best option. 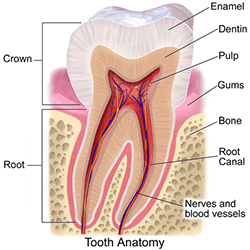 Why Reimplanted Teeth May Be Weak

There are many potential reasons why reimplanted teeth may be weakened. First, if the tooth is knocked out and replaced at a relatively young age, the body may resorb the tooth root. Essentially, the body decides to harvest the material from the tooth root and removes it. Although this can happen at any age, it occurs most often in people who are under the age of 16 when they had their tooth knocked out and reimplanted.

Other potential risks include the failure of the periodontal ligament to regrow completely, which means the reimplanted tooth may stay in place, but it might be less stable, and may be more prone to being lost again.

Sometimes a Weak Tooth Is Better than None

It’s often best to get a tooth replanted, even if it isn’t expected to last long-term. At the ages when most people have teeth knocked out (age 7-9), the dental ridge that supports the teeth, the alveolar ridge, isn’t really in any shape to support a restoration like a dental implant. Continued development of the jaw might also mean that a dental bridge or denture is also not recommended at this age.

But if you have no tooth, your body may begin to think that the bone supporting the tooth no longer has a function, and begin to resorb it. Too much resorption of bone may make it hard to have dental implants placed at a later date.

However, replacing the natural tooth, even knowing it is likely to be resorbed or poorly retained by the periodontal ligament, will help your body retain the jawbone, keeping it strong for when a dental implant becomes desirable.

If you have a tooth that needs replacing, please call (843) 706-2999 for an appointment with a Hilton Head cosmetic dentist at Beyond Exceptional Dentistry.